Most feedback we have is from game players, but we are often contacted by people who are making their own games. Of this group of visitors I am asked one question more than any other. 'How did you do the AI for the computer controlled Karts in Matica Karts?'.

We can't give away our source code as this is our livelihood, but a good programmer should be able to work their own solution from our following explanation. Game players, may be interested in how the Karts they are racing came to life.

In short the method used was to project out 2 'feeler' beams from the front of the Kart. Each feeler looks forward until it finds the edge of the track or some other obstruction. From the length of these 2 beams the Kart can figure out which way it needs to turn to avoid the obstruction, and how far away the obstruction is. Sampling this information 24 times per second it can work out when to brake and which way to steer.

The AI just didn't know how to deal with the aftermath of bad collisions with other Karts. If a Kart got knocked off track it missed sections of the track. If it got knocked the wrong way around it was slow to realise and turn around. If it hit a stationary obstacle it had no idea how to recover. I liked these errors, they were interesting. In fact I found it quite fun to drive around and cause problems for them, but I wanted to try a new approach.

The Making Of Matica Karts - Genetic Algorithm To Drive Karts.

More than likely we could have addressed all the problems with the AI, but I find Genetic Algorithms so interesting I use them at every opportunity I have.

Chaos as an early generation of AI Karts struggle along.

Another option was to use a Neural Network. We have an experimental football (soccer for those of you outside GB) game that uses a Neural Network, but it runs at such a slow speed and has taken so long to develop very simple skills, which ruled it out for use at this time in Matica Karts.

Don't be put off by the phrase 'Genetic Algorithm' it's very easy to understand. In fact I use them as an easy way out when I find a problem I feel is going to be too complicated and time consuming to figure out my own algorithm. A genetic algorithm does the hard work by evolving a good solution to a particular problem. It's my lazy way out.

You start with a pool of contestants (often called the population), each with their own system/plan to solve a particular problem. These systems are usually just random guesses to start with. For us the initial population were a set of 100 drivers with random rules for driving the course.

Next you come up with a way to measure how well each contestant has done so you can give each a score (usually called fitness). We gave points for the time each Kart managed to stay on the track and deducted points for going off track or hitting an obstacle. Points were awarded for making progress in the correct direction, and bonus points were given for the speed of progress around the track.

One of the Karts bred using Genetic Algorithm. Not selected for final game, but close. This car is driving it's self.

You can then let the contestants (Karts in our case) run wild for a time to test out their particular solutions to the problem (driving around the track in this case).

Rather than the chaos of 100 poorly trained Karts racing around, we had 10 races with 10 karts per race. The races lasted a fixed amount of time (5 minutes). At this stage the Karts were pretty much hopeless, some worse than others though.

After the first races we were left with 100 Karts with different scores. The next step was to create the next generation of 100 Karts.

These will be the children of the generation before. This is achieved by 'breeding' from a pair of the old generation to produce 2 new children for the next generation. Repeat 50 times and we end up with the same population of 100 Karts. 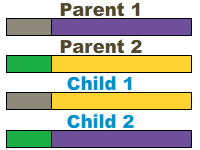 Example of how information is taken from 2 parents to create 2 children.

To recap, you start with a population of individuals who each have a random solution to a certain problem. You let each one have a try at the problem and give each individual a score. A new population is bred from the old, each individual of the new generation inherits part of their solution to the problem from one parent from the previous generation, and the other from another parent. Their final solution is mutated by randomly changing part of it.

How pairs of parents are selected for breeding the next generation is the key to the whole process. The more successful an individual was at the task (called fitness) the more chance they have of being selected as a parent.

Well done for sticking with us this far, we imagine we will only have the true fans of the game still with us by now. Click the link below for the final part.