First A Thank You To Blender.

Those of you who follow us closely will know we started using the free Blender application for our 3D work instead of 3D Studio when we developed our Matica Air Race Game and Papercraft back in 2007. It was a steep learning curve from what we were used to, but has now become an invaluable tool that we use almost daily.

We wanted to express our gratitude to everyone involved in Blender, from those directly involved in providing this fantastic free tool for everyone to use. To all the supporting resources and Web sites, all those who provide free models and tutorials, and the people who help out in the many forums. We have also been using Yafaray lately for our games and animations, which is an open source renderer which can be used with Blender so a big thank you to all those involved in Yafaray too.

The Making Of Winter Pinball - A Slow Start

We have no less than 8 Pinball games that we never published, and as huge Pinball Fans we are thrilled to eventually launch the first Pinball game in our Pinball collection.

Alex wrote his first Pinball prototype in Java in 1996, he also wrote Pool and Darts that year. He didn't get much past a prototype as the game ran too slowly. Thankfully browser games now run at blistering speeds compared to the technology back in the mid 90's.

The other more recent attempts at a Pinball game we felt were not good enough to publish, but learned huge lessons from the failures. 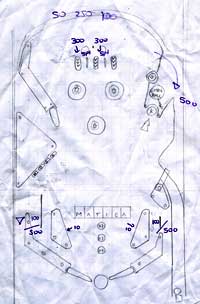 We know from past mistakes that we had to keep the table design as simple as possible. We spent a week designing a table each to get some ideas going, and then worked on our final design together.

We would love to show an example of perfect draftsmanship but can only show a scrappy design hastily sketched by Clare while sitting on the bed eating microwave popcorn and drinking tea.

This was the first design that resembles the finished table. The nose targets at the left were to activate the ball saver which we thought would be fun if it were the nose of a Reindeer character. This feature was kept as was the lower slingshots.

We kept the 3 multipliers but activated them by spelling T-R-E-E rather than M-A-T-I-C-A and used 4 targets instead of just one. 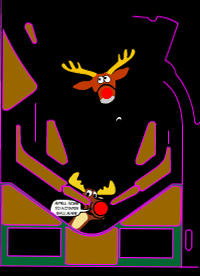 Laying Out in Flash

The biggest change was the plunger/shooter lane. Having the ball enter mid playfield was our initial design but when we switched to a more traditional design of it traveling the full length of the table and entering at the top of the playfield the game played much better.

We designed a couple of reindeer and posted them on our Twitter page. The winner we used in the final table design.

There were a lot of changes from our original paper design. We were able to spot design flaws quickly as we were using a pinball game creation tool we designed in our previous attempts at creating a pinball game. We will talk about this in the next section.