We had a mini competition between ourselves to come up with the best Playfield backdrop. We shan't reveal the winner, but here is 'his' design. 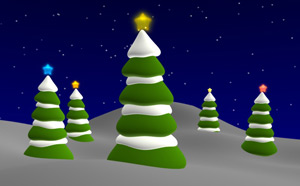 It was super quick to design, and it's so easy to add snow using Blender's particle system. The only problem we had was lighting. 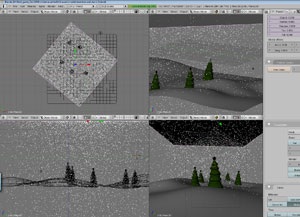 Our Winter scene in Blender

The trees cast shadows on each other, which while very realistic it wasn't what we were aiming for. We were going for a fantasy scene rather than realism. 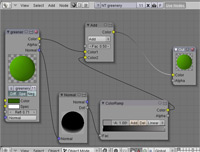 After a few complex lighting setups we tried out a feature of Blender called Material Nodes. This allowed us to fake the lighting to get the exact result we were looking for. 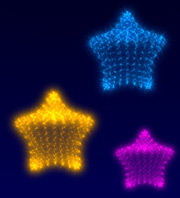 Blender also allowed us to set a colour ramp to prevent any parts of the image being too dark. We would have definately used Photoshop to draw this scene in the past, it just shows how versatile this software is.

The stars took minutes to model and we used a halo material to get them looking like they were made out of particles of light.

Pinball tables are fun to play, but many (not all) pinball tables are works of art. There are amazing graphic designs, and some components would hold their own next to Eames, Starck, or Le Corbusier.

There are some busy, and ugly tables but the finer examples really are exquisite. Our first table is not, and was never going to be one of those works of art. We did however want to keep some of the design features from real tables that we really love. 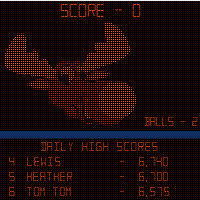 The Dot Matrix Display was the main feature we wanted to keep. Using Flash we could have produced some great looking high res animations and art work for the screen with a colour pallete of thousands.

However the 2 or 3 colour low resolution dot matrix display played a huge part in our enjoyment of many classic pinball tables.

We may not have produced classic 1950's pinball illustrations. We may not be able to reproduce the classic coin boxes, or chrome trim. But we could reproduce a tip of the hat to those classic dot matrix displays.

We didn't have the same space as a regular table so had to figure out our own size and layout. We put over 20 individual dot matrix animations into the game, and plan to add more when we refresh the table next.

This is usually a white or yellow card at the bottom of the playfield on the apron, with about 7 lines of instructions. On a few machines there is a little diagram of the pinball table showing the various features.

We recreated one of these instructions cards in the same style and placed it on our pinball table. The player can zoom in on this and see what they would on an actual physical pinball table.

The last classic pinball feature we wanted to include was the shooter/plunger lane. A typical table has a wooden lane often showing 2 or 3 different shades of wood grain.

Once we had recreated a realistic looking plunger/shooter lane, along with the dot matrix, and instructions card we were satisfied we had paid due respect to the classic pinball tables we so admire.

The next stage was so tie everything up into a game we could launch, which we will outline in the next and final part.