One benefit of having 8 Pinball games that we never published is that a lot of the programming was already done. We had the bones of a tool to build and design our tables.

This helped us get a prototype together of our table design in just days, so we could tweak it and identify any major playability issues early on.

The tool allowed Clare to scroll around the table and add components such as Flippers, Bumpers, and Targets while she was actually playing the game. She could move them around, play with the physics and save different versions of the tables.

When Clare needed a new item Alex would program a new pinball table component for her to use in the construction kit. This way we would know the game worked before we started designing and integrating all the graphics.

One major issue we found at this stage was that the top of the playfield was rarely used.

We changed the shooter/plunger from lane feeding the middle of the playfield to feeding the top which helped.

Finally we added the saucer which catches the ball and kicks it out in any of 8 directions.

Another issue was the placement of the targets which we tweaked until they were easier (but not too easy) to hit.

Once the design was finalised we could complete the graphics which were created in 3D using Blender. 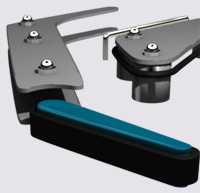 We managed to model the table at lightning speed, most of the table was completed in under a day. The flippers took just minutes and were quickly put into the game which helped us visualise what the game would look like.

We had been using temporary graphics until that point which were pretty uninspiring. 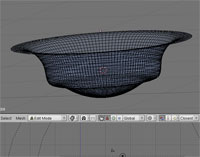 The hardest part was cutting holes into the table for the various sensors, and targets which was very fiddly.

The plunger took about 5 minutes to create using Blender, drawing it by hand would have taken hours. The Saucer recess that traps the ball was very quick to model too.

Texturing and lighting everything took much longer. All the components had to be flattened out and texture mapped, not the most pleasant task but once it was done we could experiment with different textures. We went through many designs before we came up with anything decent. 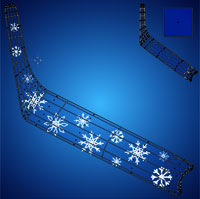 One of our Simpler Textures

We changed the colour scheme a few times during development so were very happy we hadn't drawn the components by hand and were able to quickly render new ones.

We used Adobe Flash to create a lot of the illustration based textures such as the Snowman, Snow Flakes, Bells, and Holly.

Photoshop was used for items like the plunger/shooter lane wood where we wanted to get more realistic textures.

For the main playfield texture we planned to use Blender to render a wintery scene. We will get to that soon.

Yafaray render of our Ball Saver

The last piece of the puzzle was the ball saver button. Alex designed a vector graphic which looked quite good, but we wanted to test out a 3D model lit and unlit.

We made tests with all sorts of material and lighting settings but were probably not experienced enough to get a good result. If any blender experts out there want to point us in the right direction we would be grateful to get some advice.

We gave up and tried out Yafaray which is an external raytracer that is compatible with Blender. This has Photon Mapping and Caustics so a coloured glass or plastic material would tint the light passing through.

We would like to do better but it fit into the game much better than Alex's vector drawing as it matched the other 3D components more. We will replace it if we manage to do a better job in the future.

The next part was the Winter Playfield scene and Blender came to the rescue here too, more about that in Part 3.