The Making Of Save The Cat - Character Design, the cat.

Our cat Cheetah with one of our 2 dogs.

We have 2 dogs and a cat. Our cat is called Cheetah, and she is a Bengal. We would have liked to base the game on her, but she is more lean stealthy hunter than cute and cuddly. 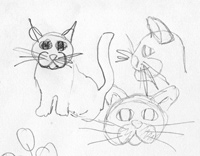 Very rough sketch of a cat for the game.

When Alex mocked up the pencil drawing of the old lady in her wheelchair he also sketched a cat. We based the old lady's cat on that sketch.

Cat from the game facing out towards the player.

The old lady would be relatively small when placed in the game, so didn't need to be ultra high quality. The cat would be even smaller.

If you design a highly detailed drawing it begins to look bad when shrunk down to a smaller size. We had to reduce the detail of the cat until it looked right at the small size it would be in the game.

Cat from the game facing to the side at it's owner.

To bring the cat to life a little we opted to randomly turn it's head. We needed the head facing out toward the player, and also from the side facing it's owner. We would need this second view of the cat's head for when we animated it leaping to it's owner.

It would look strange to see a cat leaping forward not facing the direction it was heading, and the next stage would be to create this animation.

It's one thing to draw a head facing the viewer, but turning that head 90 degrees is a bit tougher. You have to imagine what the head would look like from the side. It's easy to get this wrong, and make the character appear to have swapped heads rather than simply turned their head. In this case we were lucky as our first attempt worked well, and we could move onto the leaping animation.

The Making Of Save The Cat - Animating the Cat.

Animating the cat leaping would entail 24 separate drawings for each second of animation. Each of those drawings would have to depict each stage of the leap, and we had to make it look as natural as possible. We wanted to avoid this extra headache and considered leaving out the animation.

The animation wasn't actually needed, the game could end when the lady reaches the same height as her stranded cat. So why make things difficult for ourselves?

We felt the player needed a reward for rescuing the cat. The satisfaction of the cat leaping safely into its owner's lap.

We would be cheating the player if we didn't give them that reward, so we bit the bullet and set about animating the leaping cat.

We managed to get a reasonable result with just 19 frames of animation. This video shows the final result, but it's not very fluid as it hasn't captured at a fast enough frame rate. The final version you see in the game is much smoother and more natural looking.

We reused the leaping cat animation for the game intro/menu screen and will give it a cameo in future games. In the next part we will go on to explain the scenery design for the different levels.