The Making Of Save The Cat - Finishing Touches. 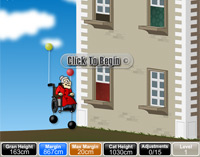 Save The Cat had taken much longer than expected. We had come so far from those early sketches, when we thought this would be a quick and easy game to do.

We were itching to release our old lady and her amazing balloon powered wheelchair to the world. Her cat was ready to leap onto computer screens the World around. The problem was, we still didn't have a game. We needed rules, and a scoring system.

The first rule was easy, go to low and hit the ground and it's game over.

Secondly it was all very well when the cat was onscreen to start with. If it was too high to see from the start though, how were you to know where to aim for?

It wasn't fair for the user to have to guess the height of the Cat so we added a dashboard to the bottom of the game with certain readouts/gauges.

To complete the level you had to get Gran to within a certain margin of the Cat (we put in a 'Max Margin' gauge to show this). This maximum margin could be used to adjust the difficulty of the game.

Run through of final game ready for release.

We could reward skilled players who not only reach the margin but beat it, by awarding bonus points for every cm they beat it by.

Another way to adjust the difficulty was to only allow a certain amount of adjustments. Go over that number and it's game over.

Again bonus points could be rewarded for not using up all of the available attempts.

All that remained was to set the levels. The height of the Cat would always be random. Each level though would consist of a fixed Maximum Margin, and a fixed number of Maximum Adjustments.

We tried out dozens of combinations, some were too easy and some were too hard. We had to make the first level easy enough for a complete beginner, but not a chore for a more skillful player. The levels needed to get harder, but not put off a rookie from retrying and getting better.

Clare and I designed many different sets of levels for each other to try, and eventually came up with a final set of levels. It took over a week of playing the game every evening to come up with though.

We were so pleased to have finished the game and it was finally published live on the site. Our top scores (from a week of constant playing) were beaten within 24 hours as per usual.

We hope you have found the story of how this game was made interesting, and most of all we hope people enjoy playing the game. Do drop us a line if you have any suggestions for this game, our other games, or new games. We also need game testers, but it's more work than fun and we can't pay anything so only offer if you really feel like giving up your precious time.

Thanks for reading, Clare & Alex.